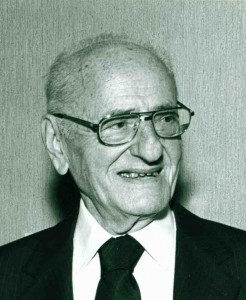 William Feinbloom (1903-1985) was apprenticed to his father from whom he learnt refraction. William graduated as an optometrist from Columbia University in 1922 and gained a PhD in 1939. Later he was awarded Doctor of Ocular Sciences (Hon) by Northern Illinois College of Optometry and LL.D (Hon) in 1980. He obtained a licence to practice when 21 and opened his own practice telling his receptionist that he would never see any patient previously seen by his father. He worked in practice three days a week the other four he spent at the university gaining first his Masters then his PhD. He joined the AAO in 1925 meeting Jack Neill and Bill Policoff about once a week.

Feinbloom experimented with Strabismus and devised a spectacle mounted 3x telescope for a visually impaired patient in 1932. Subsequently he devised a whole series of telescopic spectacles, head mounted expanded field telescopes, low vision microscopes and other visual aids. In 1937 he obtained an early patent on contact lenses with a glass optic and bakelite scleral portion. The same year he also patented bifocal and trifocal scleral lenses. In 1961 he devised a complete telescopic contact lens called the Miniscope using a Galilean system constructed as a moulded doublet separated by a sealed air space with a total thickness 4.4mm. Feinbloom also used pinhole contact lenses and devised the Tangent cone contact lens, based on a truncated cone with the vertex replaced by an 8.5mm corneal section of the lens with the sides of the cone resting on the sclera. Three vertex angles were available 43o, 46o and 49o with a standard diameter of 24mm. Numerous trial sets were sold but the design was not greatly successful. He held over 50 patents on LVAs and contact lenses and was the first to involve Bausch & Lomb in contact lenses. In 1978 he founded the William Feinbloom Rehabilitation Centre at Pennsylvania College of Optometry’s Eye Institute and received the Alumni Association Public Service Award in 1982.