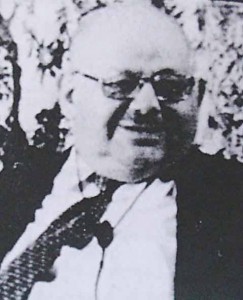 Policoff studied at veterinary school during the day, graduating in 1914, and optometry in the evening, completing his studies in 1916. He studied for the pharmacy degree in the evenings between1914-1916. He served as a vet in the 1914-18 war rising to first Lieutenant after which he played cello professionally for about a year before joining Wilkes-Barre in Pennsylvania as an optometrist in 1920. Here he started to fit Zeiss glass lenses and worked on the bakelite lenses of Feinbloom. Policoff started his own practice at his home with a laboratory in the basement where he experimented with all types of lenses including silicone rubber and soft lenses. He was a past president of the AAO and his main contribution to any meeting was a wide array of stories. He later had Parkinson’s disease but the hand tremor disappeared when inserting a lens. The AAO Founders Award was originally called the Policoff Award and he was made an Alumnus of the PCO and inducted into the Optometry Hall of Fame in 2005. He was awarded the CLMA Josef Dallos Award in 1973.