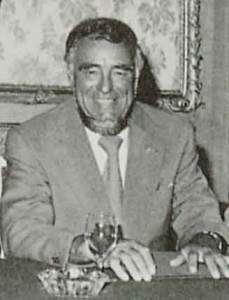 Wilhelm Sohnges (1905-1985) was born in Krefeld Rhein, Germany, lost his father in the 1914-1918 war and worked at an optical firm to support his mother. He toured Europe and Asia, conferring with leading optometrists and ophthalmologists before returning to Berlin to study optometry. In 1926 he became manager Master-Optik at Kina-Foto in Berlin before establishing his first practice in 1928 and three more in 1930. In 1931 he founded his own optical firm specialising in telescopic spectacles and started researching and fitting contact lenses. After the war, following a short period working for Adolf Muller-Welt, he opened three laboratories in Munich in 1945. In 1950 the German government awarded him a patent for perfecting refraction standards and office procedures and he became a regular lecturer with the German Optometry Association and at the University of Frankfurt.

Sohnges was already friendly with Frank Dickinson from before the war and first met Jack Neill at a conference of the International Optical League in 1951. Finding that they were each working along very similar lines they decided to co-operate in developing the micro-corneal lens which was launched in Germany, the USA and the UK. There were slight variations in design and the German lens was moulded. This co-operation also led to the foundation of the International Society of Contact Lens Specialists with Sohnges as the first president. He acquired a house on the Urfahn peninsula at Lake Chiemsee, Bavaria, in 1953 which was the venue for the first Congress of ISCLS in 1954.

In 1956 Sohnges undertook a lecture tour of the USA and was made a US Doctor of Ocular Science by Illinois College of Optometry, Chicago, in 1957. He was also awarded the Herschel Gold medal by the ISCLS in 1959. He developed a corneal multifocal lens in 1961 for which he gained the UK patent 939016 in 1962. The following year he undertook a demonstration tour through Asia before being appointed consulate for Honduras in 1965 by the state of Bavaria. In 1967 he gave a presentation at the ISCLS conference on a new type of tinted contact lens and was awarded Mercurio d’oro, a European Award presented in Rome under the patronage of the Italian President in 1970. At the 17th Congress of the ISCLS, Copenhagen 1974, his son, Carl Peter Sohnges, reported on the Combicon lens that they had been making for about a year with a hard apex and soft edge. A hybrid corneal lens – both sections non-hydrophilic – with very thin flexible edges which prevented foreign bodies from getting under the lens. The diameter was originally 13.5mm but this was reduced to between 9.80mm and 10.30mm. A special storage solution was required and polymerisation required 2 months.