Compiled and introduced by
Andrew Gasson and Tim Bowden.

Introduction to the British Pioneers

These historical pages are a celebration of the pioneers of contact lenses. They begin in the early nineteenth century with purely historical figures; progresses to the almost forgotten names of the early twentieth century who experimented with long obsolete materials, designs and fitting techniques; and ends with more recent, well known figures who laid the foundations of modern contact lens practice.

The criteria we have adopted for ‘pioneer’ status are that individuals:

We have therefore tried to include all of those with a significant influence on contact lenses whatever their background, whether medical, optometric, technical or occasionally purely theoretical. As such, the following selection is multidisciplinary, reflecting the nature of the British Contact Lens Association itself. Alas, by virtue of the selection criteria, our pioneers are no longer with us. We are therefore happy not to include some very obvious individuals who will one day be contact lens pioneers.

Pioneers are presented in approximately chronological order and as such give an overview of contact lens history. It emerges that because of the nature of most early fitting the background of our subjects is mainly medical in origin. Three other features become apparent. First, because of the original German innovations, European co-operation could only take place between the two world wars, after which British innovation followed its own course. Secondly, the pioneers were extensive travellers sharing ideas at an international level. Thirdly, much of UK contact lens development occurred in central London, in and around the Harley Street and Wigmore Street areas, traditionally homes of the great names in ophthalmology and dispensing optics.

In addition, there are many early practitioners, not in themselves responsible for key or pioneering developments, who in retrospect exhibited great courage in fitting rudimentary forms of contact lens to equally valiant patients. These are afforded an honourable mention on the final pages together with a listing of overseas pioneers who do not satisfy our criteria but deserve recognition in any publication concerned with the history of contact lenses.

It is quite possible that through oversight we may have inadvertently omitted early figures of note. We would be pleased to receive information on these or further enlightenment on our selected pioneers where research has been able to provide only scant particulars. These details will be included in subsequent revisions along with today’s future pioneers.

The London Pioneers – Where They Were

Much of UK contact lens development occurred within a small area of central London, in and around Harley Street and Wigmore Street, traditionally homes of the great names in ophthalmology and dispensing optics. 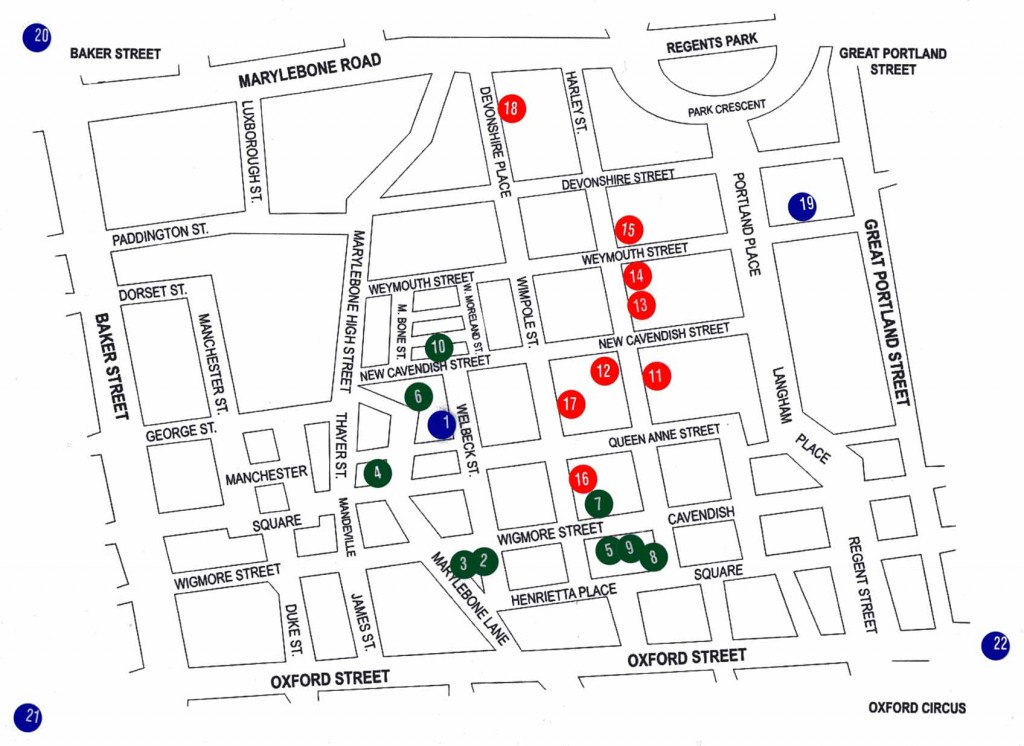 Red = Ophthalmologists
Green = Dispensing opticians
Blue = Others
* = off the map