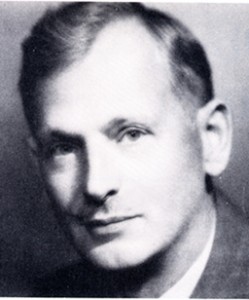 Theodore Obrig (1896-1967) joined Gall & Lemke Optical Company in 1914 as a graduate of Columbia University. His father was a shareholder but soon Theo re-entered college as a medical student but volunteered for the French Army Ambulance corps later transferring to the US army as a bacteriologist and physiological chemist. He returned to Gall & Lemke inventing the Myodisc bifocal which was later made under licence in UK by Hamblin’s and Stigmat as the Myoplet.

Obrig’s interest in contact lenses began in 1930 when he became an agent for Zeiss instigating their change to impression lens fitting in 1935. He published Modern Ophthalmic lenses and Optical Glass the same year.

By accident in 1938 Obrig discovered the use of cobalt blue glass with fluorescein. Following this he measured over 1,000 eyes finding that the cornea was bigger than previously thought. In 1942 he published the first book on contact lenses called simply Contact Lenses and retired as President of Obrig Laboratories in 1952.