The earliest contact lenses owe their development to artificial eye makers of the 19th century. The Thueringen area of Germany was at this time the centre of glass making and Friedrich Adolf Mueller-Uri (1838-1879) founded the firm of F. Ad. Mueller Sohne in Lauscha during 1860. In 1868, together with his nephew Ludwig Mueller-Uri (1811-1888) and glass-melting specialist Mueller-Pathle, he managed to make artificial eyes from Kryolith glass. This was much more resistant to the tears than previous glass and its greater lustre gave more realistic artificial eyes. At the request of ophthalmologists Alexander (1828-1879) and Hermann Pagenstecher (1844-1932) the company re-located to Wiesbaden. Friedrich Adolf’s two sons, Friedrich Anton Mueller-Uri (1862-1939) and Albert Carl Mueller-Uri senior (1864-1923), gained professional recognition and rapidly expanded the business. The brothers also made outsize artificial eyes to demonstrate pathological conditions for the use of many Universities.

In 1887 a Dr Samisch referred a patient who was already blind in the left eye because of cataract and whose right eyelids had been partially removed because of cancer. It was anticipated that this eye would also be lost as a result of desiccation. Mueller blew a thin glass shell, like an artificial eye, and fitted it to the right eye for protection. Reports state that the patient continued to use the Muellerschen Kontakt-schale night and day, retaining usable vision until his death in 1907. The shell had a clear corneal section whilst the scleral portion was opaque with artificial veining to match the other eye. This was a feature of Mueller lenses for some time to come, concealing any redness caused by discomfort and hypoxia. Breakage on dropping and corrosion by the tears was common, with a typical life expectancy of 12 – 18 months.

Friedrich Edward, (1891-1945) son of Friedrich Anton, also used the Mueller lenses and on the 2nd August 1920 presented his doctoral thesis as Uber die korrektion des Keratokonus und anderer Brechungsanomalien des Auges mit Muellerschen Kontaktschalen. His thesis reported on 11 keratoconic patients aged 22-58, wearing lenses for 1-8 years. He concluded that Mueller lenses could be worn for the correction of keratoconus and other visual defects without irritation; were safe for continuous wear, optically correct but not as accurate as ground lenses, were cosmetically very good and able to re-shape deformed corneas with light pressure, would arrest the growth of a developing cone and were easy to handle. 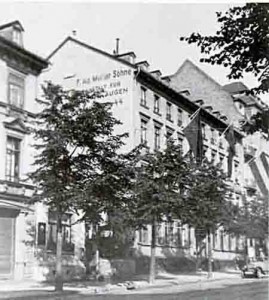 Friedrich Anton was awarded an Honorary Doctorate by Gottingen in 1925. The firm still exists in Wiesbaden, under Christoph Mueller-Uri, making artificial eyes although it no longer makes contact lenses.