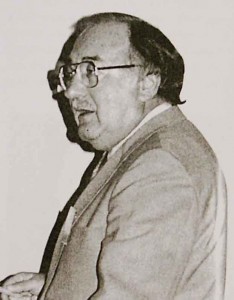 Solon (Bud) Braff (1916-1992) graduated in optometry in 1937 his interest in contact lenses commencing in 1940. He practiced impression techniques on dead sheep’s heads before securing a one-month position with Obrig in New York, learning to make and fit scleral lenses in 1941. One of his instructors was Philip L Salvatori; another was Kevin Tuohy. He began fitting lenses in his practice becoming, in 1943, the first optometrist in the world to specialise exclusively in contact lenses. He found Obrig plastic lenses flattened in use and learned from dental laboratory compression moulding techniques how to polymerise blanks to the rough shape of the eye. Obrig was against this procedure. Braff was introduced by optometrist, Ed Goodlaw to Xavier Villagran, a contact lens technician, to see if he could make scleral lenses the Braff way. After some success, in 1945 they formed Solex Laboratories, derived from their first names. They required a manager and invited Kevin Tuohy to join them as a third partner.

Optometrists taking impressions needed an ophthalmologist for corneal anaesthesia. Braff investigated other techniques, eventually finding a cold mixed alginate which gelled in about 1 minute at room temperature, meaning that no anaesthetic was needed. In 1971 he developed the soft lens material Gelflex which gained FDA approval in 1978 with Braff doing all the research work, usually costing $1million per year. He taught at the Southern Californian School of Optometry 1948-1973, defined many contact lens terms published in the Dictionary of Optometry and Visual Science and made the lenses for the original King Kong.