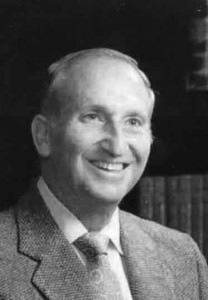 Seymour Marco (1924-1983) was a country optometrist in Stark, Florida, who started making hard lenses in his garage. In the late 1950s, there were only about six major contact lens laboratories in the USA. Frontier in Buffalo; The Plastic Contact Lens Company and Breger Muller-Welt in Chicago; Obrig in Sarasota; Continuous Curve and Solex in California. Frontier Contact Lenses had been started in Buffalo in 1959 by Allan Isen and George Sitterlee and they wanted a new outlet in Florida. Marco had become quite an expert in the manufacture and fitting of lenses so Frontier Contact Lenses, Florida, started in 1962 as a joint venture with Frontier, Buffalo, providing technical expertise in the shape of contact lens technician Jack Sciolino as the laboratory manager. In 1965 Seymour bought out Isen and Sitterlee and changed the name to Frontier Contact Lenses Inc.

Around 1966 Marco got together with his friends Don Brucker and Dave Ewell and started to experiment with better ways of producing soft lenses. Later on, Marco made his own Hema material using a distillation process to produce the monomer which was poured into plastic capsules and heated for polymerisation. The lenses initially produced by Bausch & Lomb were of indifferent quality and numerous laboratories wanted to produce their own materials to remain competitive. Seeking more oxygen, Marco worked with Don Brucker, Dave Ewell, and George Tsuetaki plus other experts including Patrick Benz, Peter Semone and an Indian chemist, Pandoran Kamath. Together they produced a new polymer and gained FDA approval in 1978. The name of this material was etafilcon A but it was never patented to make reverse engineering more difficult.

Marco borrowed hugely to finance the sterile facilities and wet room necessary for his laboratory. Frontier Florida made the first toric, bi-toric and bifocal lenses and their claims to fame were the soft toric lens, approved by the FDA and etafilcon A, approved for extended wear. By the start of the 1980s they were turning over $3 million per year and were bought by Johnson & Johnson in 1981. Their expertise and etafilcon A, together with the production method of Danalens, devised by Michael Bay of Copenhagen, provided the foundation for a new phenomenon in the contact lens world of 1988 – ACUVUE.

Seymour Marco had taught aviation during the second world war and flew around the USA extensively to promote his lenses and teach contact lens fitting. He also started an ophthalmic instrument division, Marco Ophthalmics, now run by his son David. Sadly, soon after the Johnson & Johnson take-over Marco’s eldest son was lost in a plane crash off the coast of Florida and Marco spent considerable time trying to locate the wreckage. He had been battling cancer for years but with the loss of his son he died in 1983.