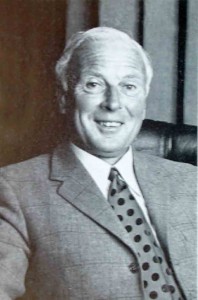 Raymond Kelvin Watson came from an optical background. He began fitting contact lenses during 1945 in his own successful Cheshire practice, originally set up, when he was 21, with £250 from his father. He used a set from Dixey based on Zeiss lenses.

Despite post-war difficulties, he set up a workshop with a small group of friends making scleral lenses and this became Kelvin Lenses Ltd. In 1946 he spent several months in the US but was disillusioned with the commercial way in which lenses were sold there.

He was impressed by Feinbloom whose lens design was based on a conical section resting tangentially on the globe. This Feincone lens was more comfortable than the Zeiss lenses but he decided that a combination of the two might prove even better. He designed a conical transition 5 mm wide and developed a manufacturing process using a metal mould with several parts. He used 50 main tools with 15 inserts and over a 100 buttons. All the metal tools were hand polished. Between 1947 and 1948 he sold more than 120 50 lens fitting sets. Toroidal tools were also introduced. The lenses were originally sealed but later were fenestrated.

From 1948 his partners dropped out and he ran the company on his own. He introduced contact lenses to Holland, Belgium and the Scandinavian countries. Watson was joined in 954 by Eric Bloodworth who ran the visiting practitioner service which eventually had 43 practitioners.

From the 1950s Watson adapted his moulding technique to producing corneal lenses and he eventually manufactured several thousand per month. Compared with other laboratories using lathes, he achieved greater consistency and reproducibility. A more advanced design, the continuous curve, emerged during the 1960s and the laboratory moved to larger premises in Denton. Kelvin lenses and equipment were exported worldwide and the company became public in 1971. At its peak it employed 700 staff and achieved a turnover of £2.6 million. Watson died in 1974 and the company continued under the chairmanship of his son Geoffrey. By 1977 it had become the UK’s largest manufacturer of corneal lenses. 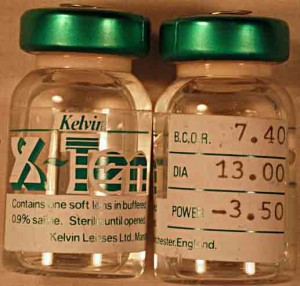