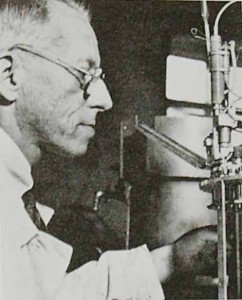 Professor Otto Wichterle (1913-1998) had the greatest influence on contact lenses since the second world war. He invented Hema, developed the spin casting process, the first effective production method for soft contact lenses, and then secured numerous patents associated with these areas of expertise.

He was born in Prostejov, Northern Moravia, and after a sickly childhood wanted to study mechanical engineering at university. A friend, however, suggested chemistry and about this time he developed an interest in politics. In 1936 he received his first doctorate and subsequently produced his first synthetic polymer in 1938-9. Germany invaded in March 1939 and the universities were closed. He managed to find a job at Bata Research, inventing with others in 1940, Caprolactam; this was later called Nylon 6 and marketed as Silon. The fibre spun from this material was better quality and cheaper than nylon made by Dupont. In 1942 he was imprisoned for four months and interrogated by the Gestapo because of his political views. He was later released because of his considerable value to the Bata Research Institute. During the war he filed about 65 patent applications and experimented with the transformation of vinyl type halides into keytones: this was known as the ‘Wichterle Effect’.

Czechoslovakia was liberated by the USSR and USA in 1945 and Wichterle resumed work on his second doctorate in organic chemistry becoming Professor of the Department of Plastics at Prague University in 1949. A chance meeting in 1951 with a health ministry official led to the development, with Dr Drahoslav Lim, of Hema. He filed patent PV 187-53 for whole range of hydrophilic materials, sparsely cross-linked hydrophilic gels and their applications. In 1954 hydrogels were used in human surgery but contact lens manufacturers derided the idea of a soft lens. A dental laboratory in Holesovice tried making lenses with closed polystyrene moulds but because of the contraction of the material during polymerisation edges were very poor and only the occasional lens proved satisfactory. In 1958 Wichterle was dismissed from his post at the Technical University in Prague and research on lenses was halted. In the autumn, research recommenced at Dioptra laboratories at the Institute of Macromolecular Chemistry (IMC). M. Cerny succeeded in using glass moulds to produce perfect optics on soft lenses but the edges, still a problem, were smoothed by hand with a file. In one year he was able to produced only 100 lenses.

In 1958 Wichterle was appointed director of the IMC. He had become a chemist of considerable repute and was the author of a highly popular textbook on inorganic chemistry. Dr Maximillian Dreifus fitted some of the early soft lenses at the Second Ophthalmological Clinic in Prague and proved that soft contact lenses could work. The Ministry of Health, however, decided to stop funding his research so Wichterle continued experiments at home. 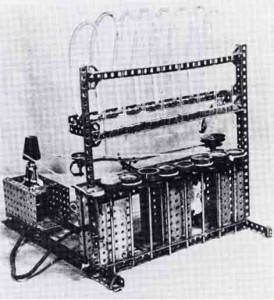 In 1961 he visited the USA for the first time talking about Hema for both surgery and contact lenses but the reception for the medical applications of hydrogels was very reserved. In April 1961 it occurred to him that a lens might be cast in an open rotating mould. A request for further research on these ideas was rejected by the Ministry of Health so on Christmas Eve he built a device with a single spindle from a mechano set, the generator from his son’s bicycle and a bell transformer. On Christmas afternoon he put it into operation and succeeded in producing the first four lenses with perfectly regular edges. The lenses were rinsed overnight in saline and the next day with Dr Dreifus he tried them in the eyes of patients. They were very comfortable and provided good over-refraction. That night Wichterle drafted a patent application for spin casting soft lenses and submitted it before the end of the year. He first increased the size to five spindles but by New Year’s Eve he had built another machine with 13 spindles. The bicycle generator was not powerful enough so he used a stronger engine from his gramophone set. In a week he and his wife made several hundred lenses. 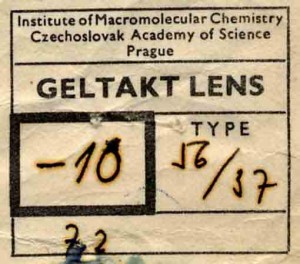 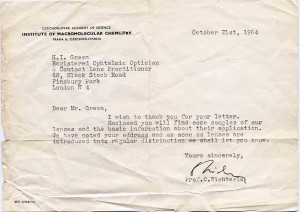 The lenses were known as the Spofalens, after the state enterprise SPOFA through which he had filed the patents. Previous experimental lenses were called Geltakt. News of these developments started to spread and the State Planning Commission with the Ministry of Foreign Trade released special funds and Wichterle set to work on designing production machinery at the Institute of Macromolecular Chemistry. In summer 1962 a basic carousel machine took shape for mass production. 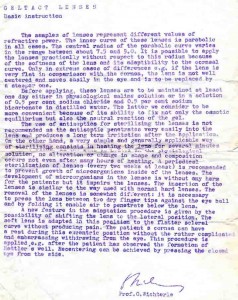 In 1965 National Patent Development Corporation (NPDC) bought the American rights and in October Bausch & Lomb became the producer and sub-licence partner. Although Bausch & Lomb were a large optical manufacturer they had not previously been involved in contact lens manufacture. They were therefore less conservative than existing hard lens laboratories. In 1966 three production lines were set up, two for supplying Bausch and Lomb and one for Spofa.

Wichterle was dismissed as Director of the IMC in December 1969 because of his involvement with the ‘Prague Spring’ and prepared himself to work as a tractor driver. Eventually he managed to get very short-term contract work at the IMC, quietly to continue his research. He successfully created a number of medical applications for hydrogels including implants to vocal cords, capillary drains for the surgical treatment of glaucoma, implants for the direct infusion of drugs to tumours, an artificial larynx, substitution of the vitreous body including instruments for its replacement, hydrophilised heart pumps, the production of Xerogel rods for contact lens lathing, toric contact lenses, gel inserts to bronchi for drug administration for asthmatics, veterinary implants for the synchronisation of rutting, and a number of other small services to medicine.

In 1977 the patents were challenged, mainly by Continuous Curve Contact Lenses and in May 1977 the Academy sold these patents to avoid any liability if the court case failed. Wichterle and NPDC won in 1983. Wichterle retired in 1979 but continued with experiments at the IMC working on intra-ocular lenses and in 1983 started to learn computer programming. In all he wrote six books, over 100 publications in scientific journals and held over 150 patents. He received a great many awards during and after his life. In 1993, Asteroid 3899 was named Wichterle and a statue was erected outside the IMC in 2005.