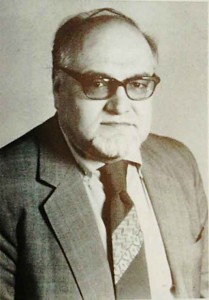 Norman Gaylord was a world renowned polymer chemist and President of the Gaylord Research Institute Inc. of New Providence. New Jersey. He was employed by Lenny Seidner who had the largest laboratory on the US East Coast in 1969-70 to develop a hydrogel lens. They started work on the project but estimated that to obtain FDA approval could cost $12million. About 1970-71 they decided to pursue development of rigid lens material that would transmit oxygen instead. The laboratories worked under various names, Guaranteed Contact Lenses, Polymer Optics and also Polycon. They investigated mixing silicon and MMA as well as fluorocarbon and MMA. Gaylord applied for patent 3,808,178 on 16 June 1972 for a polysiloxanylalkyl acrylic ester and also a copolymer of fluoroalkyl acrylic ester and an alkyl acrylate or methacrylate; both patents were approved on 30 April 30 1974. Eventually Syntex, a pharmaceutical company which developed some of the first birth control pills, bought Polycon from Lenny Seidner, his brother Joseph and a minor partner, Eddie Gary and marketed the Polycon lenses in 1979.