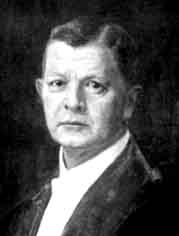 Leopold Heine (1870-1940) was Professor of Ophthalmology 1907-1935 at Kiel University, Germany, and also a Geheimrat or Privy Councillor. In 1929 he read a paper at 13th International Congress of Ophthalmology in Amsterdam and created wide interest in the use of contact lenses, promoting them as an excellent way of correcting keratoconus. Heine was a greatly respected ophthalmologist introducing in 1905 cyclodialisis – also known also as Heine’s operation – for the treatment of glaucoma. He was the first to describe Norrie’s disease of the retina in 1925.

Heine’s method of fitting consisted of using a large number of afocal lenses with varying corneal radii. By changing the radius of curvature, the power of the liquid lens between the glass shell and the cornea could be used to correct the ametropia. Ida Mann, however, described this technique as leading to a “reductio ad absurdum”. Eventually Heine realised that afocal lenses would not work for gross errors and agreed that contact lenses should be optically powered. He accepted that ‘contact glasses’ would never totally replace spectacles, despite prejudice against the latter. Their scope was nevertheless widening, particularly for irregular corneas and keratoconus. Heine claimed to have had great success with lenses for all types of refractive error and that, when used for children, the development of ametropia, notably myopia, was arrested.

In ‘Facts about Contact Glasses’ published in the Optician of 5 November 1937, Heine reported on the use of Zeiss lenses and filling them with lukewarm, 0.9% saline solution to fill the space between the cornea and the lens. With nearly 1200 patients, he had never had a lens break in an eye due to a blow and there was no need to use shatterproof glass. He listed their advantages as: (1) better perspective, fusion and range of vision; (2) no misting up of lenses; (3) ideal for sailing, swimming, surgeons, cooks, actors, skiing, hunting, motoring, gymnastics, tennis, architects, engineers, airman and chemists.