Kevin Tuohy (1919-1968) was born in New York, starting work in November 1939 with Obrig who had a policy of employing those with a physical handicap. He trained as a technician before becoming a contact lens fitter and, via Canada, joining Solex on La Cienega in Beverley Hills.

In 1947 the haptic portion of a lens broke off and Tuohy formed a better edge before trying the optic part in his eye. The base curve was about 3mm flatter than ‘K’ and the edges were very thick. He tried this, however, on several patients and by 1948 the corneal lens was launched. Tuohy and his promotion took the contact lens world by storm. 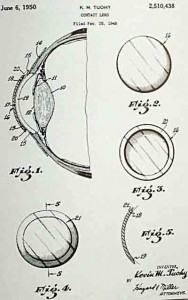 He applied for a patent in 1947, awarded 6th June 1950 (US 2,510,438), losing a considerable amount of money trying to defend it including 10 years of litigation against the Plastic Contact Lens Company. Later Braff sold his share of the business to Tuohy who took on a new partner in 1955, the optometrist Zabener. After an out of court settlement both Tuohy and Zabener sold the laboratory and patent to the Plastic Contact Lens Co in 1959 who continued to collect royalties of $0.50 per lens until the patent expired in 1967. Zabener emigrated to Israel and Tuohy started his own laboratory in Wiltshire Boulevard at the Miracle Mile. He committed suicide in 1968.