Josef Dallos was born in Budapest, the son of a head teacher. He qualified as a doctor in 1928 working in the Number 1 University Clinic of Ophthalmology under Professor Emile de Grosz. He soon took up contact lens fitting using the original Zeiss lenses. He suggested some improvements in their design which were jointly patented with Zeiss.

Dallos developed a moulding technique using Negocol and Hominite – the first method to be used on the living eye to produce a successful contact lens. In 1933 he published his first article on contact lenses, ‘Ueber Haftglaser und Kontactschalen’. The same year he was granted a Hungarian patent for producing lenses that could be stabilised under the eyelids without touching the cornea and also gained specialist registration as an Ophthalmologist. One of his early supporters was Professor Sattler and he was visited by ophthalmologists from all over the world. These included Rugg-Gunn, Williamson-Noble and Mann from the UK and the optometrist, Obrig, from theUnited States.

The first paper by Dallos on contact lenses in 1933

In May 1937 he moved to England with his brother-in-law, George Nissel. Dallos worked at 9 Wigmore Street, adjacent to the Hamblin Showroom, before establishing the first purely contact lens centre at 18 Cavendish Square. He fitted lenses at Moorfields between 1938 and 1948 and attended St Mary’s and the Western Ophthalmic hospitals. He fitted scores of servicemen with glass sclerals as well as 84 cases of mustard gas Keratitis from World War I.

Dallos used both corneal and soft lenses for cosmetic purposes. For ophthalmic pathology he preferred flush-fitting ventilated glass sclerals. Nissel estimated that between 1937 and 1964 Dallos fitted 6,000-7,000 patients with sclerals. He was the first – together with Bier – to describe fenestration in order to avoid corneal oedema and to increase wearing time. Don Ezekiel describes how:

“He told of a patient with Keratoconus who needed a small amount of lens removed to eliminate an area of touch. Unfortunately, a hole was made in the lens. Dallos polished the hole, apologised to the patient for his mistake and told him that he would make another lens. Lenses were made from glass and being a long weekend, it would be ready later the following week. The patient did not return for some months. When he eventually returned Dallos asked him why he did not return. He told Dallos all was fine and he was wearing the lens the full day. Dallos then said to me, ‘it was then a matter of working out where to place the fenestration.'”

Patient instruction leaflets from the 1940s

In 1964 he set up his own rooms at 17 Devonshire Place equipping them for glass and corneal lens manufacture. Some of his many assistants were Stephen Gordon, Robert Turner, Anne Silk, Don Ezekiel, Roy Hampson and Ted Meredith. Josef Dallos never retired, attending his practice every day until his death in the summer of 1979. Ida Mann described Dallos as “Devious, emotional, secretive personality…a touch of genius maybe… and damned difficult to deal with.” Further accounts describe his superhuman energy, quick temper but readiness to apologise. He had no sense of time and he never cared about money.

The BCLA commemorates his name with the annual Dallos Research Award. This is intended to fund a contact lens research project, the first being given to Michael Port in 1982.

A commemorative plaque to Josef Dallos was unveiled at 18 Cavendish Square, London, on 23 June 2010. 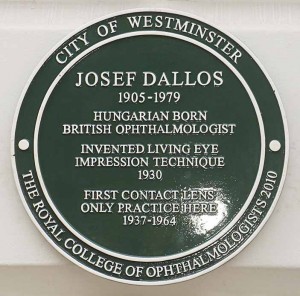