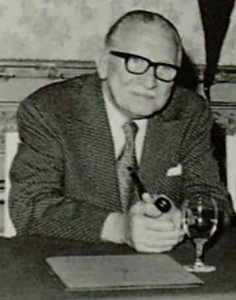 John (Jack) Collins Neill (1902-1978), was born in Philadelphia and became the third generation of optometrists; he graduated from Pennsylvania College of Optometry (PCO) in 1922. In the early years he used large scleral lenses and successfully inaugurated the use of contact lenses for keratoconus. Neill joined the PCO faculty in 1929, becoming Professor of Optometric Mechanics and subsequently of Contact Lens Practice and Sub-normal Vision.

In 1931-32 he developed a spectacle mounted ptosis prop utilising a facial impression. In 1938 he worked with Feinbloom on telescopic spectacles and developed, with Dr Edwin F. Tate, the Tate-Neill Binocular Bifocal Telescopic Spectacle. In 1935-41 Neill headed PCO’s extra- mural department, one of thirteen travelling lecturers covering eighteen US cities. He published in 1947 the paper ‘Contact Lens Haze’ which for the first time explained the cause of Sattler’s Veil. In 1951 he began a two-year collaboration with Dickinson and Sohnges on the Microlens and with them founded the International Society of Contact Lens Specialists, serving as Vice-President. He was awarded the Herschel medal in1957 and an Honorary Degree of Doctor of Science in 1971. Neill was also made an Honorary Diplomate of the American Academy of Optometry in 1974 and became the first Chairman of its contact lens section. In 1957 and 1958 he gave early morning lectures on the University of the Air on WFIL-TV. He also had a private practice in Philadelphia specialising in contact lenses and low vision.