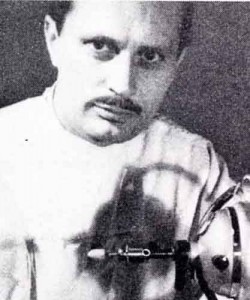 Istvan Gyorffy (1912-1999) studied at the Medical Faculty of the University Peter Pazmany, Budapest, 1930-36 before being employed at the Second Ophthalmic Hospital of the same university from 1936-1986. Initially he worked under Josef Dallos but when Dallos moved to London in 1937, Gyorrfy found himself head of the very busy contact lens clinic without the means of manufacture as Dallos had taken all the equipment from the medical school for making contact lenses. While visiting his sister in Frankfurt he discovered poly methyl methacrylate (PMMA) recently marketed as Plexiglass by the German firm of Rohm & Hass and also to be known as Altuglas in France, Perspex made by ICI in the UK and Lucite by Dupont USA. He found that sheets of 1mm thickness could be used to make scleral lenses by casting. In a publication of 1937 he showed that PMMA is a thermoplastic polymer that with heat can be moulded on casts taken from eye impressions to form scleral lenses. Mullen in the USA and Dudragne in France also claimed this as a first. In 1963 Dr Gyorrfy adapted his casting technique with sheets of PMMA to the manufacture of corneal lenses. His process was used in the USSR, Bulgaria, other Iron Curtain countries and in New Zealand by the optometrist Peter Heginbotham of Wellington. In all Gyorffy estimated that he fitted more than 10,000 patients over 33 years at the hospital and in his own practice, published more than 100 papers and visited many congresses around the world.