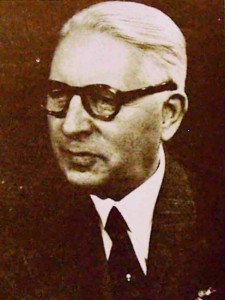 Henricus Jacobus Marig Weve (1888-1962) was born in Nijmejen, Holland, about the time of the first ever contact lens fitting. He studied medicine in Amsterdam 1906-1912 and was appointed chief surgeon at the Rotterdam Eye Hospital 1916-1929. He was nominated Professor of Ophthalmology and Director of the Royal Netherlands Eye Hospital in Utrecht, a position he retained until retirement in 1958.

Weve worked on uveitis and keratitis, and adapted and improved the Gonin technique for operating on retinal detachments in the 1920s. Later his interest was in the treatment of malignant intra-ocular tumours by diathermy.

Prior to 1937 he had visited and perfected the contact lens fitting technique of Dallos in Budapest, setting up a contact lens department in Utrecht. In 1937, together with Dr Petrus Franciscus Xaverius Thier, he entered into a contract with Keelers from the UK so that Charles Keeler and his colleagues could learn the Dallos method of fitting and manufacture of contact lenses.