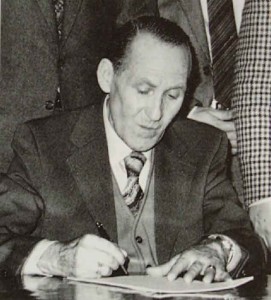 Heinrich Wohlk (1913-1991) was originally an engineer working with PMMA at nautical instrument makers Anschuetz & Co. He was fitted by Heine with glass lenses in 1936. With his interest aroused, he experimented with lenses made of PMMA. At the Kiel University Eye Clinic he made moulds of living eyes and used them as the basis for standardising the haptic portion of scleral lenses. A separate optic section, edged with a bevel, was secured in a vee-grooved hole in the centre of the haptic section resulting in a lens with interchangeable optics. The war intervened and Wohlk only returned to lens manufacture – in his garage – in 1946, founding Wohlk Contact Linsen in 1948. Wohlk assessed his own corneas and realised these could be the basis for corneal lens design. The parabolic back curves of the Parabola and Parabolett lenses were based on numerous casts made by Professor Meesman at the University Eye Clinic, Kiel. Wohlk used Schott glass moulds filled with granulated PMMA. A similar technique was used in 1977 to make Hartflex lenses from CAB and later Conflex from Anduran material. In the 1980s, Wohlk began producing Conflex-air lenses from a Fluor-Silicon-Methacrylate-Copolymer material developed by Dr. Kurt Polzhofer.

Wohlk made its first soft lenses in 1971 from an unreliable material produced by Maurice Seiderman in the USA. Wohlk and Dr. Polzhofer refined, developed and produced 38% Hema for the Hydroflex ‘mini’ lens with diameters between 12.0mm and 13.5mm. Lenses were produced on adapted Nissel lathes leading Nissel to remark that he had never seen so many of his lathes in one place before. Later, higher water content lenses were developed. Expensive, automated lathing methods meant that Wohlk missed out on the new moulding technology for soft lenses. It was only in 2000 that Wohlk started using its own technology for producing cast moulded monthly lenses with a 55% water content.

Wohlk was also at the forefront of developing silicone elastomer lenses. Silflex was the result of four years intensive work following basic research by Agfa-Gevaert AG and made from silicone rubber that had been specially developed and produced by Wacker-Chemie GmbH of Munich. Moulded between two quartz glass moulds the lens was bombarded with oxygen ions and electrons to render the otherwise hydrophobic surface hydrophilic.

In the 1950s Wohlk supplied instruments, moulds and related tools to Frederick Danker in the USA. The company was called Danker Wohlk because of Wohlk’s established name in Europe. Danker and Wohlk visited one another and exchanged technical expertise. Wohlk also started teaching clinics and an institute in Kiel 1962. It began co-operation with Zeiss during 1980 with a complete take-over by 1990. The company was bought by Bausch & Lomb in 2000 but in 2005 a management buy-out restored independence.