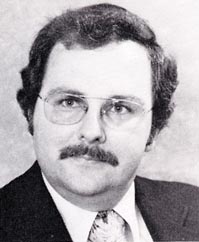 George William Mertz (1946-2002) was born in Fort Scott, Kansas, a mid-west fort devised to keep native Americans and settlers apart. Because his father had a small oil well, George studied petroleum engineering (see also Irving Fatt 2004 edition) at Kansas University, graduating in 1969. He worked for Standard Oil Company (Chevron) for three years before enrolling at the University of California at Berkeley where he gained his Doctor of Optometry in 1975.

George Mertz and Brien Holden met whilst Mertz was a researcher at Smith-Kettiwell in 1977 leading to a life-long friendship. Mertz moved to Bausch & Lomb in the late 1970s where he was very involved in researching extended wear. He was the first to conduct real overnight studies on a group of both wearers and non-wearers with beds in one room and a pachometer in another.

Brien Holden asked George Mertz to join him, along with Des Fonn, Ken Polse and John McNally, all on extended sabbaticals at the Cornea and Contact Lens Research Unit, Sydney, Australia, in 1980. Mertz continued his landmark research on the ocular physiological response to extended wear. This led to the Mertz-Holden-McNally partnership that went on to write the recipe for the current high Dk silicone hydrogel lenses.

Mertz returned to the USA as Vice-President of Clinical research at CIBA Vision, Georgia, and after three years moved to Vision Tech Inc. as Executive Vice-President of Science and Technology, becoming President 1983-1985. During this time he was appointed to the Optometrists in Industry Committee of the American Optometric Association Contact Lens Section (1983) and was appointed to the Ophthalmic Community Advisory Committee of the American Academy of Optometry in 1985. He formed G. W. Mertz & Associates, a contact lens consulting company and was appointed to the working group on Contact Lens Use Under Adverse Conditions by the Committee on Vision, National Research Council, National Academy of Sciences (1988). He moved to Vistakon as Manager of Clinical Research and Product Analysis, later Director of Academic affairs, a position he held until his death.

In all George Mertz was involved in clinical research and professional education programmes for over 25 years. He was dedicated to optometry and passed on his enthusiasm to young people entering the profession. He was extremely competent, professional, ethical to a fault, hated injustice, but also quiet and modest with a passion for doing things right.