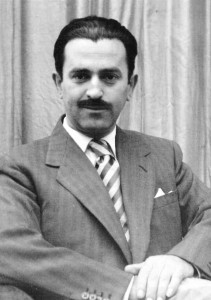 George Nissel was born in Transylvania and studied engineering in Czechoslovakia. He first became aware of contact lenses because of his sister’s connection with Dallos and first saw Istvan Rakos, a dental technician, making glass scleral lenses for Dallos in 1934. In May 1937 Nissel and Dallos came to London having recently become brothers-in law. Nissel volunteered for military service at the outbreak of World War II but was refused as an ‘enemy alien’. He therefore acted as an air raid warden and made gun sights whilst continuing his work on contact lenses. Nissel gained British nationality after the war.

He started G. Nissel and Co. in July 1946, originally making glass sclerals for Dallos and other adventurous practitioners. He began manufacturing sclerals from PMMA as soon as the material became available later that year, producing lenses mainly for the UK but with some for export to Sweden. The first laboratory was a small engineering workshop of 100 sq. ft in central London’s Siddon’s Lane. Nissel subsequently moved to larger premises in Glentworth Street with a consulting room on the first floor. This was used for a time by Burnett Hodd when he started in practice.

Using his engineering background, Nissel produced in 1947 the first commercial lathes and polishing machines specifically designed for contact lens manufacture. In 1958 he moved the laboratory making corneal lenses to Hemel Hempstead, closing the London office in 1972. Nissel was one of the first laboratories to recognise and produce aspheric corneal lenses. He issued a monthly Newsletter for many years, reporting on his visits to innumerable overseas contact lens meetings. At its peak, G. Nissel and Co. employed over 90 people supplying lenses and contact lens machinery all over the world. 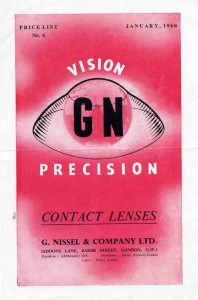 In 1963, Nissel was probably the first to produce soft lenses outside of Czechoslovakia. He used lathing and was asked by Otto Wichterle to find a suitable way of polishing hydrophilic lenses. These attempts were discontinued in 1968 because of inconsistencies in the materials then available.

Together with Jack Gallimore, Nissel was instrumental in forming the European Federation of the Contact Lens Industry and acted as the first secretary.

The BCLA commemorated his name with the annual Nissel Memorial Lecture, the first being given by Professor Montague Ruben in 1982. The Pioneers lecture from 2004 continues this tradition. 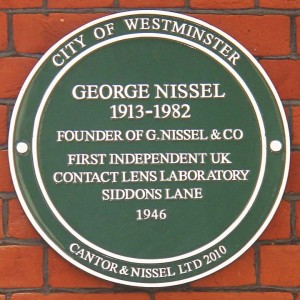