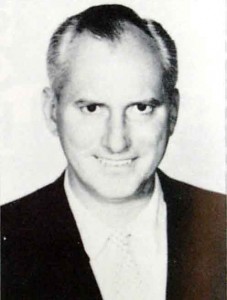 George Jessen (1916-1987) became interested in optics because his father was blind. He had mobility problems due to a childhood accident and started work as a lens technician surfacing spectacle lenses. Later he studied optometry, meeting Newton K. Wesley who was one of his lecturers. Then started six years of research in his basement trying to get lenses to fit and correct Wesley’s keratoconus. When successful, they formed the Plastic Contact Lens Company from the same basement. This developed into Wesley-Jessen which, at one time, supplied 90% of all the contact lenses used in the world. They also had a contact lens practice which Jessen ran as the clinician whilst Wesley ran the business. They set up the National Eye Research Foundation and were jointly responsible for the contact lens education of a great many practitioners and for developing the contact lens market around the world. In 1953 they published Contact Lens Practice. Jessen was a very warm, intelligent, innovative man and his widowed mother and mother-in-law lived at his house. He had one son, also an optometrist, and George suddenly retired from practice on the death of his grandchild.

In 1962 George Jessen formalised his ideas to induce a useful change of corneal shape with contact lenses at a conference of the ISCLS and referred to this as orthofocus. He defined this as the reduction, modification or elimination of a visual defect by the programmed application of contact lenses. He used the Cycon Lens which was the start of orthokeratology.