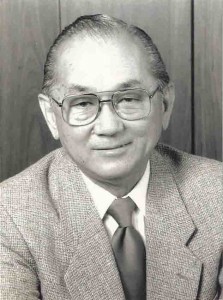 George Fumio Tsuetaki (1922-1989) was born in the town of Loomns in the Sierra foothills of California. His early interest led him to attend the Chicago School of Optometry. After graduation in 1952, he had many jobs including working in a Chicago jewellery store, fruit picking on his brother’s fruit ranch where he was called ‘The Doctor who picks pears’, and tool and die work before becoming a contact lens technician. He established a practice and laboratory in New Orleans in the late 1950s, working with fusing plastic materials to make bifocal contact lenses; the first of these was the Invisible Gradient Bi-Focal. He returned to Chicago to establish a basement laboratory in the late sixties on the city’s north side. There he continued to work with fused bifocals, creating the Platinum Oriented Fused Bi-Focal and the Pan-O-Site Bi-Focal and the Double Fused Internal Crescent Bi-Focal. He held over 17 patents worldwide which included the ‘no jump’ Tangent Streak bifocal, introduced in 1987. Later developments were a trifocal and Fluorex materials. Tsuetaki owned Fused Kontacts of Chicago for manufacturing lenses, G.T. Laboratories for making polymers and Luxicon Products for solutions. Tsuetaki received the Creative Design and Process Award from the CLMA and the DaVinci award from the National Eye Research Foundation.