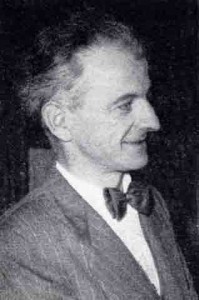 Geoffrey D. McKellen was the son of an optician in Hanley, Stoke on Trent. He studied optics in Manchester and gained the fellowship of the BOA. He worked in the practice of W. B. Barker and later returned to North Staffordshire.

With Raymond Watson he landed in America on 3 May 1946. They stayed for just over a month, visiting amongst others William Feinbloom, one of the great U.S. pioneers of contact lenses.

McKellen was a founding member of the Contact lens Society and later became President. He practised in North Staffordshire, retiring in 1978. He was chairman of Staffordshire LOC for many years and was also a former chairman of the North Midlands branch of the BOA. From 1929 to 1971 he taught optics at Stoke on Trent Technical College and worked extensively with Arthur Forknall. He was granted an Honorary DCLP ‘in recognition of his advanced and original work’ and developed a particular expertise in scleral lenses. He died shortly after the death of Stella, his wife for 50 years.