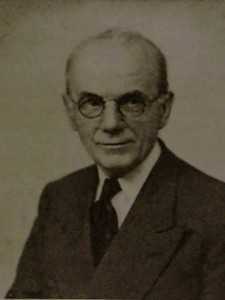 Frederick Arnold Williamson-Noble qualified in 1914 and became the first FRCS in ophthalmology. He served in the Royal Navy during World War I and in 1924 was appointed supernumerary surgeon to London’s St Mary’s Hospital with subsequent posts at Moorfields, the National Hospital for Nervous Diseases and the Royal National Throat, Nose and Ear Hospital. Williamson-Noble was co-editor of The British Journal of Ophthalmology in the 1930s, the first treasurer of the Faculty of Ophthalmologists and civilian consultant in ophthalmology to the Royal Navy.

He worked with Mann, Dallos and Rugg-Gunn at 18 Cavendish Square and found he could reduce the onset of Sattler’s veil by blocking the facial nerve with protocaine. In the 1950s he designed a scleral lens with a central near zone surrounded by an annulus for distance vision and was himself fitted by Robert Turner with scleral bifocal lenses in 1953-4. These were possibly the first bifocal contact lenses in the UK.

In 1946 he was vice-president of the newly formed Contact Lens Society and in 1953 wrote the forward to Norman Bier’s book on contact lenses.