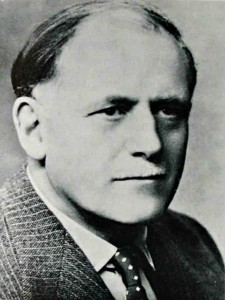 Frederick Thomas Ridley was born and educated in Birmingham. He graduated in 1922 and became pathologist at the Central London Ophthalmic Hospital. He then worked at the Western Ophthalmic Hospital and in 1928 gained his FRCS and joined the staff at Moorfields.

Ridley worked with Alexander Fleming on lysozyme and devised a system of purification and concentration. His rooms in Harley Street were bombed in 1940 and he was given temporary accommodation with Dixey’s.

In 1948 Ridley set up the contact lens dept at Moorfields, High Holborn. He was appointed Medical Officer in June 1950 and the department began to see patients in September 1951 with three assistant medical officers and a full-time technician the following year. Using PMMA, he worked with both unfenestrated flush fitting shells and the newly developing micro-corneal lenses, ultimately fitting several thousand therapeutic cases for conditions including indolent corneal ulcers, dry eyes and symblepharon. The Ministry of Health agreed to purchase his production method for £2,500 on condition that he continued research work at the hospital. Ridley addressed the question of veiling and preferred channels in the haptic portion to fenestrations in order to relieve the negative pressure under a sealed lens which he felt caused corneal oedema. In the late 1940s to early 1950s, Ridley worked in conjunction with Charles Keeler in designing a slide rule for calculating lens parameters, similar in appearance to that produced by Nissel. His rule was never produced on a commercial basis but the prototype is now in the Contact Lens Collection of the BOA Museum at the College of Optometrists.

Ridley was President of the ophthalmological section of Royal Society of Medicine in 1963 and retired as Director of the Moorfields contact lens clinic in 1968 at which time 14,000 new cases a year were being seen. He was succeeded by Montague Ruben

Recent development in the manufacture, fitting and prescription of contact lenses of regular shape. Proceeding of the Royal Society of Medicine 39, 1946 842-848.