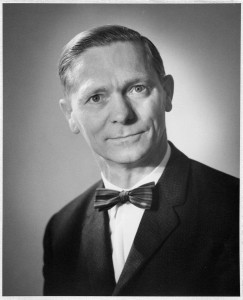 Frederick (Freddie) Arthur Burnett Hodd came from an optical family and received an honours diploma from Northampton Polytechnic in 1939. He achieved a distinguished career in optics although plans to join his father’s practice in Moorgate were interrupted by the war. He enlisted in the army as a private, served in India rising to the rank of Lieutenant Colonel and was awarded the MBE.

He started fitting contact lenses in the 1950s, sometimes using the consulting room set up by George Nissel in central London. He designed the Hodd tapered lens which defined the degree of flattening for the peripheries of corneal lenses. He also conceived the first continuously flattening peripheral curve in advance of the lathing technology to manufacture it. He developed a particular interest in complex cases and was expert with scleral, toric and keratoconic fitting. A particular interest was the visual performance of bifocal contact lenses which formed the basis of his Presidential Address to the Contact Lens Society in October 1967.

Burnett Hodd was President of the British Optical Association in 1968-69 and 1977-78 and instrumental in its change to the current College of Optometrists. He was an examiner for the British Optical Association and Spectacle Makers Company and maintained academic links with several of the UK’s optical teaching institutions. He was awarded the Herschel Medal from the ISCLS in 1976 and elected a Life Fellow of the College in 1990-1991.