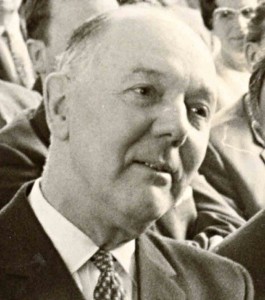 Frank Dickinson was born in Blackpool and spent most of his optical life in St Anne’s, Lancashire. He travelled extensively and on his second trip to the US in 1939 to meet transatlantic contact lens pioneers such as Obrig and Feinbloom, he encountered Keith Clifford Hall.

Dickinson and Clifford Hall were some of the first optometrists to fit contact lenses in the UK and in 1946 they collaborated on writing the first authoritative book to be published in England. Dickinson wrote about the more technical aspects of fitting.

Soon after the war, Dickinson made his first visit to South Africa and in 1948 bought a practice in Johannesburg, moving there with his family and becoming the country’s first contact lens practitioner. Even after the family returned to England he retained his connections, enjoyed the travel and wrote regular reports on his visits. Throughout his life made a point of sharing his experiences and research – the bibliography of his writings lists over 300 items. He was a talented artist, a church organist and a fine pianist in a variety of styles. In addition he was a popular lecturer and often in demand as an after-dinner speaker.

Dickinson is probably best known for the Microlens, which was a result of international co-operation. He had been working on making lenses smaller and thinner and found, at the 1951 Congress of the International Optical League, that his old friends John Neill from the US and Wilhelm Sohnges from Germany had similar ideas. They agreed to co-operate in their research and the Microlens, a term coined by his wife Muriel, was the result in 1953.

The lens, made from PMMA, was 9.50 mm in diameter with a single posterior curve and a very small edge bevel. It was fitted some 0.2 to 0.3 mm flatter than flattest ‘K’ and was very much smaller and thinner than anything that had previously been available. Later enhancements to the back surface design and modern gas-permeable materials have given us the hard lens of today. The three-way collaboration also resulted in the foundation of the International Society of Contact Lens Specialists.

Dickinson was President of the British Optical Association in 1961-62. He was awarded the first Frederick William Herschel Gold Medal of the ISCLS in 1956; he received honours from America, including Hon. DOS ( Chicago,1956), and from Germany; and Hon. MSc (Bradford) from Chancellor Harold Wilson in 1972. There is a Frank Dickinson Collection of contact lenses in the BOA Museum in London; a suite named after him at the Department of Optometry and Neuroscience, UMIST; and his archives are held at the Wellcome Trust in London (GB/NNAF/P195850). A commemorative plaque has now been placed close to the site of his practice in St Anne’s Square.

An Introduction to the Prescribing and Fitting of Contact Lenses, Dickinson and Clifford Hall, London 1946.