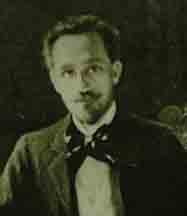 Eugene Kalt (1861-1941) was born in Landser in Alsace, France and started medical studies in Besancon. He completed them in Paris where in 1886 he became the Registrar to Professor Photinas Pannas at the Hotel Dieu Hospital. In March 1888 Professor Pannas introduced Kalt’s work to the Academy of Medicine in Paris.

Kalt had fitted a young man suffering from keratoconus with a blown glass shell which corrected his vision. His idea had been to try to compress the cone to reduce the keratoconus: the improvement in vision came as a welcome surprise. The lenses had a single posterior curve, a total diameter of between 16 and 22mm and could be worn only for a few hours. Subsequently lenses were tried from several French opticians. They were ground from glass with two back curves matching measurements taken by a Javal keratometer and checked on cadaver eyes. Difficulty with manufacture forced Kalt to abandon his work which was later continued by Sulzer.

In his account of Kalt’s work, Pannas outlined the problem of treating of keratoconus. He dismissed the use of parabolic spectacles and stenopaic slits as they alleviated only one of the troublesome symptoms and did nothing for the disease itself. He described the shells as being the size of enamel shells as used as ocular prostheses having a radius of curvature similar to that of the cornea. He considered that they could be tolerated perfectly for many hours and that they could reshape the very thin cornea. If the curvature of the glass was well chosen he found that a state near to emmetropia could be achieved and vision improved throughout the whole of the visual field. He observed that in one case the vision improved from counting fingers to 20/70 or 6/21 and newspaper print of approximately N10 to N8. (Calculation by Pearson ‘Kalt, Keratoconus, and the Contact Lens’ Optometry and Visual Science Vol 66′ No9 17/5/89 pp 643-646.)

Pannas also noted the publication in the March 1888 issue of Archiv Fur Augenheilkunde the work of Fick in Zurich which achieved “absolutely similar results” He hoped that “the method will soon acquire the favour of practitioners.”

In 1890 Kalt became Consultant at the Centre Ophthalmologique des Quinze Vingt and remained there until his death on 9 May 1941 at the age of 80. He was a founder member of the Ophthalmological Society of Paris and is remembered for the 1894 introduction to Europe of corneo-scleral sutures in cataract surgery, a procedure first used by Williams in the USA during 1867. He also devised the first forceps specifically for intracapsular cataract extraction. Kalt was awarded the Chevalier de la Legion d’Honneur in 1909 for his work at Centre Ophthalmologique des Quinze Vingt and promoted to the grade of Officer for his services during the First World War. A street was named after him in Landser in 1988.