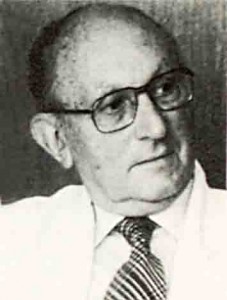 Eugene (Gene) Hirst OBE (1911-1989) emigrated from Czechoslovakia in 1939 to Auckland, New Zealand, as it was the farthest he could get from Czechoslovakia. He was originally a dental technician and made his first contact lenses for a keratoconic patient by taking an impression of the eye using dental material and moulding a lens over a stone cast. There were no lathes available at the time so the optics were fashioned by hand using small brass laps. In partnership with optometrist Douglas Mortimer he started the Hirst Contact lenses Ltd Company in 1943 and also an optometric practice called Mortimer and Hirst. Hirst taught many opticians how to fit lenses. In 1967 Hirst began making soft lenses, adding aspherics and front surface torics with prism ballast and truncation. In 1970 the company expanded with a branch in Adelaide, Australia, which also specialised in aspheric lenses. The Australian company was sold a few years later to Hydron USA with a licence to manufacture Con-o-Coid lenses and in 1976 Hirst Contact Lenses Ltd was sold to New Zealand Optical Ltd and renamed Hirstlens NZ Ltd. It is now run by John Shennon who had joined Hirst as a laboratory technician in 1968. After the agreement with Volk lapsed the name Con-o-Coid was replaced by the Hirst Ashpere.