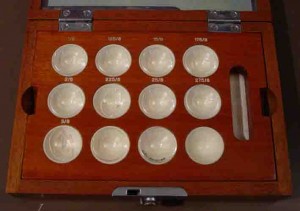 Edmund Tomkins gained his SMC and BOA diplomas in 1909. He was a dispensing optician and joined the London office of Carl Zeiss as a technician in the ophthalmic lens and instrument department about 1912. One of his roles was to call on ophthalmologists and opticians to discuss the merits of contact lenses. At that time the only lenses available were either the bespoke blown glass lenses from the firm of F. Ad. Muller et Sohne in Wiesbaden or the ground glass lenses made by Carl Zeiss of Jena, also in Germany. The main interest for these would be the correction of keratoconus and other visual defects which could not be improved with spectacles. Tomkins himself wore contact lenses for demonstration purposes but with a maximum tolerance of about four hours.

In 1919 Tomkins became a partner with George Salnow Martin to form Martin & Tomkins at 25 Margaret Street, London. In the early 1920s Tomkins had one of only two sets of Zeiss contact lenses in the country. The other was obtained by a leading West End dispensing company, thought to be Hamblins. It is uncertain but very likely that as Tomkins had a fitting set and had worn contact lenses himself he would have carried out some fitting as well. In later years Tomkins was great friends with Harry Birchall of C. W. Dixey, another leading firm of dispensing opticians. Martin & Tomkins was taken over by Keeler’s during the 1980s.