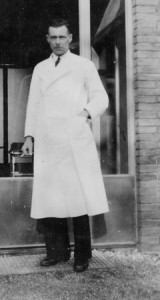 Edmund Albert Plaice originally worked at Hamblins in London with Dick Smellie, leaving in 1937 to start the contact lens department for Clement Clarke. Affectionately known as Kip, as in kipper, he had travelled with Charles Keeler to Utrecht to learn the manufacture and fitting techniques for fitting glass scleral lenses. He also spent three months during 1937 in Debrecen, Hungary, to gain experience with other facial prostheses.

Edmund Plaice’s certificate from the Institute of Optical Science

Plaice, who had both the FBOA and FSMC qualifications, left Clement Clarke in 1945 to start his own laboratory. His contributions to contact lenses included the ptosis prop, the contact lens foreign body locator and the lead eye protector from x-rays. Together with Treissman he published Principles of the Contact Lens in 1946, a small book “intended primarily for the use of ophthalmologists.”

Plaice predominantly used the impression method and in 1949 he accepted the invitation to run the contact lens department at London’s Royal Eye Hospital. He continued fitting scleral contact lenses and artificial eyes here until about 1977. The department later moved to the South Wing of St Thomas’s Hospital where at various times both Brian Collison and Jennifer Chaston worked.