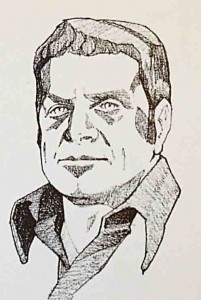 Donald Brucker (1932-2005) was brought up in Los Angeles and became an optometrist because his brother-in-law was a Professor of optometry at Berkley. He graduated from there in 1956.

His interest in the then rather primitive contact lenses began in the late 1950s. Brucker thought he could make better lenses for himself and friends and set up his own laboratory where he developed a continuous curve hard lens with a gradually flattening periphery. The design had a fairly smooth posterior surface and its success prompted him to start Continuous Curve Contact Lenses in 1960.

Before Bausch & Lomb gained FDA approval, Don Brucker developed his own lens design in a material devised by Maurice Seiderman who claimed it had been developed independently from activities in Prague. Lenses were also lathed rather than spun cast. Brucker started clinical work on the new material in 1971 and gained a New Drug Application in April 1974. Hydrocurve, using Hefilcon A, was only the second hydrogel in the USA to achieve FDA approval. The cost for the approval was $1.5 million. Later the lens was made from Bufilcon material and the first ‘Ultra Thin’ lenses to improve oxygen transmissibility and reduced hypoxia were introduced in the USA in 1977.

Other companies followed suit. The following year Hydrocurve gained FDA approval for the first soft toric available in the USA. In 1982, Continuous Curve Contact Lenses was sold to Revlon which also owned Barnes Hind. Brucker continued to run both companies.

In the mid 1970s, by virtue of Hydrocurve lenses, Continuous Curve was the second largest contact lens company in the world after Bausch & Lomb and in the early 1980s they were the fastest growing company on NASDAQ. Brucker also made gas permeable hard lenses and claimed to have had the first such lenses on the market. He was an early soft lens investigator for Bausch & Lomb and also developed cold contact lens disinfecting solutions which were made by Burton-Parsons.

In the 1980s Johnson & Johnson tried to buy Hydrocurve which was then a public company valued at several million dollars. They eventually thought it overpriced and subsequently bought Frontier Contact Lenses in Florida. After the sale of Continuous Curve to Revlon, Brucker developed pharmaceutical solutions such as the Migra Spray for migraine. He started again in contact lenses in the early 2000s with an ex employee who had come up with a new lens design. Brucker thought this an exciting lens but while awaiting FDA approval he died on 3 December 2005 following a series of strokes.