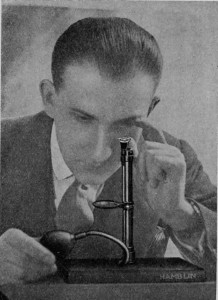 Dick (Richard) Smellie, or simply RS, was one of the earliest contact lens fitters in the UK. RS originally joined Hamblins aged 16, working as a junior medical artist illustrating in colour diseases of the eye. He left to work for another optical firm but was enticed back a year or so later. From about 1921 he worked with Hamblins at 31 New Cavendish Street as a medical artist, making ocular prostheses and fitting contact lens. He used Zeiss lenses which then had a delivery time of about six weeks.

After Dallos arrived in London during 1937, RS continued fitting lenses at the Hamblin Contact Lens Centre at 18 Cavendish Square, helping Dallos settle into his new role. This was the first practice in the UK concerned solely with contact lenses. Bill Shaw and Stephen Gordon from Hungary were also fitting lenses with Gordon working mainly at Hamblin’s Manchester centre. After the closure of 18 Cavendish Square in 1957 the Contact Lens Centre moved back to 31 New Cavendish Street. 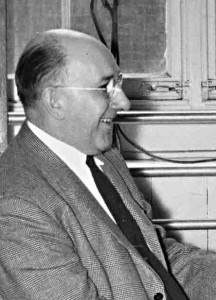 RS joined the board of Hamblins in October 1952 and became managing director in 1958. By 1968 he had served the company for 50 years and retired in May 1970. He joined Anne Silk in her practice, then in Upper Brook Street, where he helped produce artificial eyes. He also helped train future artificial eye fitters at his home in Aldbury, Hertfordshire.

He was a council member of the Contact Lens Society and President in 1961-62. His Presidential address “covering the past and present but more particularly the future of contact lenses and those who prescribe and supply them, provoked more discussion than such occasions usually prompt.” The Dispensing Optician, 16, no. 6 October/November 1961.

Dick Smellie’s great-great-grand father was a printer in Edinburgh, said to have introduced Robert Burns to Society and also involved with the foundation of the Encyclopaedia Britannica.