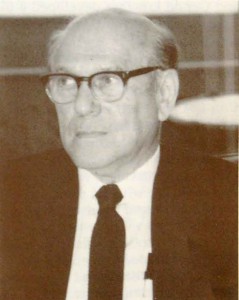 David Volk (1918-1987) of Pepper Pike, Cleveland, Ohio graduated in optometry in 1939 from Ohio State University, returning to graduate with a medical degree in 1946. He was granted several US patents in 1965 and 1966 describing methods and machinery for generating aspheric surfaces. Volk met with Gene Hirst in New Zealand in 1964. Hirst had already produced the V contour lens to approximate to the curvature of the cornea. This design had a multicurve construction which with blending had about seven back curves in all. Hirst produced Con-o-Coid lenses in 1966 in collaboration with Volk. He had exclusive rights to Volk patents anywhere in the world other than the USA and Canada which had been granted to Obrig.

Volk was granted several more US patents in 1967 concerning the generation of aspheric surfaces on contact lenses. These led, in 1968, to the launch of an improved Con-o-Coid lens by Obrig, in collaboration with Volk and using entirely new equipment. Volk’s US Patent 3,482,906 of 1969 detailed a projected range of mass-produced corneal lenses with concave ellipsoid surfaces. These had base curves between 6.50mm to 8.50mm with 0.05mm intervals and eccentricities from 0.4 to 1.6 at intervals of 0.1. The patent also covered the possibility of a conicoidal front surface to reduce thickness.