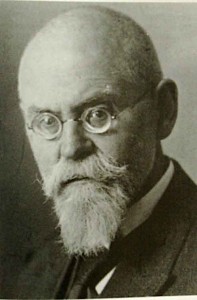 August Mueller (1864-1949, no relation to the Muellers of Wiesbaden) was born in Munchengladbach the son of the proprietor of a tool factory. August studied medicine at universities in Bonn, Vienna, Berlin and finally Kiel where he studied under Professor Volker at the Ophthalmology Clinic. He wrote his doctoral thesis on ‘Brillenglaser und Hornhautlinsen’ (Spectacle and Corneal lenses) which he presented on 28 February 1889. He had previously written a series of articles on lung oedema, periscopic spectacle lenses, the need to nationalise the pharmaceutical industry as well as articles about contact lenses.

Mueller was very myopic, about -14.00D, and constantly plagued by the reduction in image size and aberrations inherent with spectacle lenses. He came to the conclusion on a purely theoretical basis that a lens placed directly on the eye would overcome these problems. He took casts from cadaver eyes and measured the radii of curvature as 7.5mm for the cornea and 14mm for the sclera. He had three lenses made up by Himmler of Berlin, a famous optician and instrument maker, which were ground glass with powers of -14.50D, -15.00D and -19.50D *. They had diameters between 15 and 16mm, a central thickness of 0.30mm and well rounded, well polished edges. The corneal curves were between 7.00-7.65mm and the scleral curves 13-14mm. One lens also showed an intermediate curve between the corneal and scleral curves. Although Mueller achieved good visual results, the comfort and wearing time were poor even with the help of cocaine! 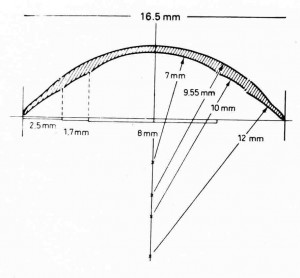 He wanted to continue in ophthalmology but was hindered by his poor vision. After working in Dornap, Dusseldorf and Forbach he returned to Munchengladbach and opened a practice specialising in physiotherapy and orthopaedics gaining himself the nickname of “Knocher-Mueller” (Bony Mueller). He suffered some religious discrimination as he had married Emma Kahmzow in 1890, a Protestant and were his six children although he was a Roman Catholic. He published three treatises in his new chosen speciality; `Der muskulare Kopfschmerz’ (Headache due to Muscle Spasm 1911) ‘Lehrbuch der Massage’ (Treatise on Massage 1915) and ‘Der Kreuzschmerz’ (Low Back pain 1926).

*These lenses were discovered in the reserve archive of a German museum by contact lens historian Robert Heitz.