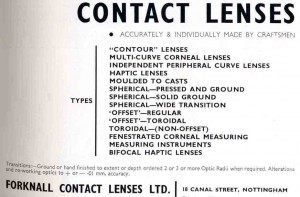 Arthur Forknall started with an engineering apprenticeship and took one of the early pre-war optometry courses, probably in Manchester. He set up practice in Parliament Street, Nottingham, where in the late1940s he soon developed an interest in contact lenses. He was often visited by his friends, Robert Fletcher and Arthur Stokes of Newbolds in Longton and they jointly experimented with impression lenses and PMMA lens manufacture. Forknall preferred the Norman Bier method of preformed fitting with fenestration to improve tolerance.

He started a small laboratory in the late 1940s with one or two technicians using a system of partial moulding even for pre-formed lenses. He made lenses very fine and very thin. He adopted the offset or zonal lenses which had been designed by Arthur Bennett from an idea suggested by McKellen following his visit to the US in 1947. Torics were also produced along with ‘Fen Corn’ lenses for assessing the optic fit of preformed lenses. These were similar to the FLOM lenses designed by Bier. He co-operated extensively with McKellen on sclerals but also produced very thin, high quality corneal lenses. In 1954 the Contact lens Society awarded him a grant to evaluate the potential of the corneal lenses then available. Following his death his flourishing practice, which was 80% contact lenses, was taken over by Geoffrey Woodward in 1962. The laboratory was taken over by Shiels and the offset lens design by Robert Turner of GT Optics.