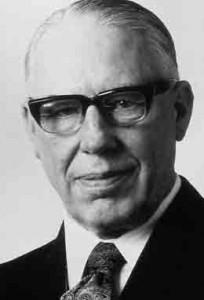 Arthur Bennett, despite winning a scholarship to Haberdashers’ School, originally went into banking during the 1930s. He soon joined Willesden Optical Company as a spectacle lens worker.

By 1945 Bennett had moved to the more prestigious Stigmat which announced its intention to manufacture contact lenses. Two years later Bennett redesigned an offset zonal scleral lens. This had been suggested by McKellen after the latter had visited the US in 1946. While at Stigmat, Bennett also designed telescopic units to assist the partially sighted. Aspheric lenses were a prevailing interest and he published numerous papers concerning both spectacles and contact lenses.

In 1951 Bennett became Senior Technical Officer in the Inspectorate of Medical Supplies at the Ministry of Health where he stayed until1962. During this time he continued the work begun at Stigmat on British Standards for spectacle lenses and frames. In the late 1950s and 1960s Bennett was an ad hoc consultant to Keeler’s on the lens computations for their low vision aids and ophthalmic instruments.

He became an evening lecturer in visual optics at Northampton Polytechnic where he was renowned for his erudition, lucidity and sense of humour. In 1949 he published the original edition of his Optics of contact Lenses, the first book to look at the optical aspect of prescribing. He continued his mathematical analysis with the advent of soft lenses. He also undertook the task of completing, mounting and cataloguing of the BOA collection of ophthalmic lenses. Altogether, Arthur Bennett published 200 papers, 7 books and contributed to numerous others

Bennett was honoured with the Owen Aves Medal in 1969 and in 1988 with a colloquium at City University to celebrate 50 years of full and part time teaching at the institution. In 1989 he was elected Life Fellow of the College.