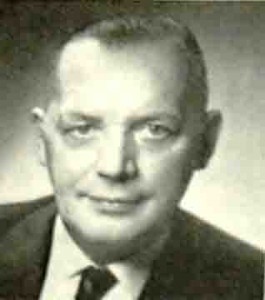 Adolf Wilhelm Mueller-Welt (1904-1972) was the son of Adolf Alvin Mueller (1872-1937), an artificial eye maker in Lauscha, Thueringen, Germany. The family moved to Wiesbaden where the ‘Welt’ was added.

In 1900 his father produced a scleral lens but as he needed to make 70-80 for one good one he abandoned the idea. During 1920 the family moved to Stuttgart where Adolf Wilhelm produced his first fluidless contact lens in 1927 using Schott glass. The family were against this but his wife, Ruth, invested her inheritance to finance the development and he applied for a patent in 1928 (registered 553842, 1932). In 1929 he blended the transition curve and changed from moulding to blowing lenses. After a visit to Professor Heine in 1933 he began annealing the glass to reduce stress. 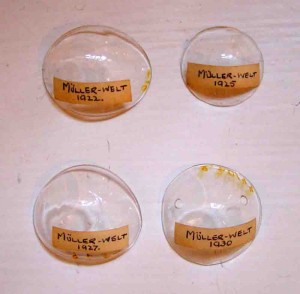 A 1935 paper in Klinische Monsalsblatter Fur Augenheilkunde described his lenses as blown over a series of pre-formed toric castings for the scleral portion whilst the optic was ground and polished for power. So stable were the lenses that they could be transferred from boiling to iced water without breaking. The back surface matched the corneal curvature as closely as possible, giving a liquid capillary lens. Fitting sets contained 20-120 lenses allowing variations in fit, size and power. Wearing times of 6-7 hours were achieved compared to only three-quarters of an hour with Zeiss lenses.

In 1936 Mueller-Welt developed a 12-spindle machine for grinding and polishing, creating sets of 5,000-6,000 lenses. He perfected the first thickness control in 1939 and the first automatic annealing ovens in 1940. In 1941 he purchased a slit lamp and started to work on corneal lesions, oedema and fluorescein observation. Army officers were not allowed to wear spectacles in uniform so Adolf, his wife Ruth and assistant Fraulein Leipold, travelled extensively with tens of thousands of lenses to fit from stock. After the war many allied soldiers took Mueller-Welt lenses back home.

Helmut Polte, formerly of Zeiss, joined and improved the production line with 24 spindle machines and diamond-cutting tools. Massive inflation increased glass costs so Mueller-Welt made brass male and female moulds with a ball bearing, ground to power, in the centre of the male mould. The moulds were closed and plastic was injected. By 1948 they had started making corneal lenses.

In 1949 Mueller-Welt, unable to enter America, went to Toronto at the suggestion of Joseph Breger, a US lawyer. In partnership with Breger he made lenses for the Canadian and US markets and helped Breger set up a duplicate plant in Chicago. The business flourished and a lawsuit followed, brought and won by Breger, allowing him the right to the name and expertise of Mueller-Welt in the USA. The Stuttgart company continued to operate and the Mueller-Welts returned there in 1960. Adolf died at work in 1972.