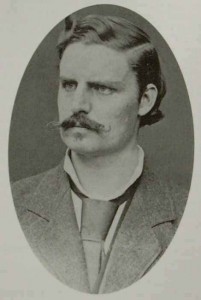 Adolf Eugen Fick (1852-1937) was born in Marburg, Germany, son of Ludwig Fick Professor of Anatomy. He volunteered for military service in the Franco-Prussian war then studied medicine and ophthalmology gaining his doctorate in 1875. Fick had unsuccessfully tried to secure a position at the University of Cordoba, Argentina but instead during 1879 he emigrated to South Africa to help his TB. He registered as a physician, surgeon and obstetrician and settled in Richmond in the Karroo where he opened a general medical practice. Fick revisited Germany in 1886 and married Marie Wislicenus, the couple moving to Zurich the same year. Here he practised as an ophthalmologist, conducting investigations into contact lenses. His findings were submitted in September 1887 and published as ‘Eine Contactbrille’ in Archiv Fur Augen Heilkinde for March 1888.

Fick had glass lenses blown in 19, 20 and 21mm diameters after taking casts of rabbit eyes that had worn them for 6 to 8 hours. He continued his work by taking casts of human cadaver eyes. From this he had bicurve lenses blown and wore one in his own left eye for 2 hours. He also tried lenses on his colleagues at the Clinique Ophthalmologique in Zurich. Fick also had ground glass shells made by Abbe of Jena with a radius of 8mm in the optic zone and 15mm in the scleral zone, calling them ‘Glascornea’. He tried to use these for patients with irregular astigmatism and proposed their use for keratoconus, aphakia and myopia. He obtained good results in only one of six patients fitted. With his ideas dismissed by colleagues, Fick did not pursue them further, writing in 1902 “Unfortunately I have found no cases exactly suited for the application of such a contact glass, but the improved visual acuity in proper cases of irregular corneal astigmatism has been surprising.”

Fick became reader in Ophthalmology and Physiology at the University of Zurich from 1887-1914. A very patriotic German, he volunteered for military service and was commissioned to field hospitals on various fronts. He was captured by the French and released in 1919. Fick died aged 84 in 1937 having survived a leg amputation following a sporting accident. His uncle, Adolf Fick, was the physiologist who invented tonometry.